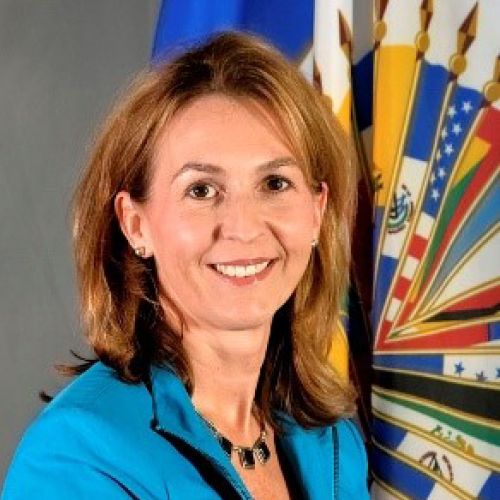 Alison August Treppel has served as the Executive Secretary of the Inter-American Committee against Terrorism (CICTE) of the Organization of American States since August 2016, where she is responsible for promoting the OAS’s counter-terrorism agenda throughout Latin America and the Caribbean, and for leading OAS technical assistance efforts in such areas as cybersecurity, border management (air, land and maritime), the prevention of terrorism finance and the proliferation of weapons of mass destruction, among others.

A native of the United States, Mrs. Treppel has nearly 30 years of experience working within the inter-American system, the last 15 of which have been dedicated to multidimensional security. As Section Chief and later Deputy Director of the OAS Department of Public Security from 2006 to 2016, she supported efforts to prevent and counter threats to citizen security, including firearms trafficking, human trafficking and other manifestations of transnational organized crime. She has also served as political liaison to numerous OAS security-related bodies, including the Committee on Hemispheric Security.

Mrs. Treppel holds a B.A degree in International Relations and Spanish from Dickinson College and completed an executive education program in international and national security from Harvard University’s Kennedy School of Government.